In case of any injury, it is required that the ends of the wound need to be held together for its healing and to carry out this process a stitch or row of stitches need to be done with the help of a needle. In other words, it’s simply stitching the ends of the body tissues after any surgery. It is called as a Suture.

For this suture to enter into the tissues it needs to be designed in such a manner that the suture material should pass through the tissue without any distress.

It’s a device that consists of an important accessory a needle and a correct length of thread attached to it, with which the desired operation can be carried out.

There are numerous materials either natural or artificial that are used for making the threads. The needles that are used along with it are also of different shapes and sizes.

Suture needles are really important as they help in carrying out the stitching process. The suture needles have some ideal properties and they are:

1. The needles should be sharp enough to penetrate inside the tissue with a very insignificant resistance.

2. It should be rigid enough to resist bending.

3. It should also be flexible so that it does not break.

4. It should be slim so that there is very less pain.

5. Has to be stable inside the holder so that there is exact placement.

6. They should be sterile.

7. They should be corrosion-resistant.

There are basically two needle end types: A) Eyed and B) Eyeless.

These needles are reusable and need to be prepared at the time of surgery. These needles come in separate packaging along with the suture head. With these kinds of needles, any thread and needle permutation is possible.

They are also known as Swaged or Atraumatic Needle. These types of needles come attached to the suture head which has a particular length of thread. This type is manufactured in the factory and comes as a single package. The main advantage of this type of needle is that that the doctors or the nurses do not need to waste their time in inserting the thread into the needle hole.

These suture needles come in different shapes and with different curvatures which include:

Straight: This needle is used when the tissue is easily reachable and is to be used by hand, that means it does not require an instrument. They are very useful for skin closures.

1/4 circle: This kind of a needle has a shallow curvature due to which it is used for easily accessible convex surfaces. It is used in ophthalmic or microsurgical procedures.

5/8 circle: This needle is perfect for deep, confined holes that can be used by rotating the wrist with no lateral movement.

1/2 circle: This is also used in confined locations.

3/8 circle: It’s the needle’s curvature which makes it easy for it to manipulate in the large and superficial wounds and hence, is the most commonly used.

Half Curved or Ski: This kind is used mostly for laparoscopic surgeries.

Half curved at both ends of a straight segment or Canoe: Its curvature helps curved needle to be used in laparoscopic surgeries.

The needles are further classified according to the needle body and point. Needles which have rounded bodies can have either sharp or blunt points. Due to this design, they can be used in easily penetrated tissue like abdominal and peritoneum. Based on this they include:

Cutting Needles: They are triangular shaped bodies with every three edges as cutting edges. And hence the name cutting edge needles. They are used to penetrate through tough tissues and also good for suturing skin.

Conventional Cutting Needles: These are useful for skin and sternum as their cutting edge is on the concave surface and hence, useful in the above procedures.

Amongst these three needles, the reverse cutting needle is mostly used as they have more strength as there is minimal risk of cutting through the skin tissue.

Along with all these types of needles, there are also some needles which have varied lengths and weights. Super heavy ones are used for very tough tissues.

Cost: The price for reverse cutting needle ranges from 39 to 42 Rs per dozen.

Be the first to review “Suture needles” Cancel reply 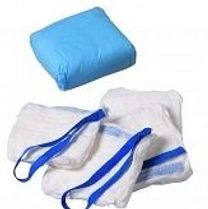